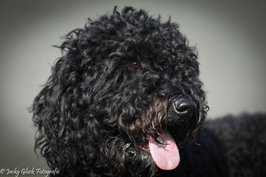 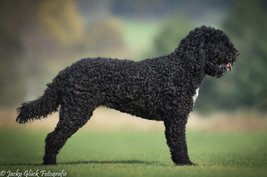 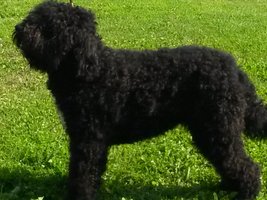 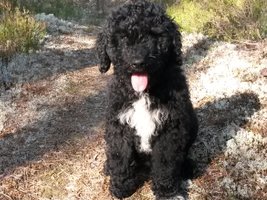 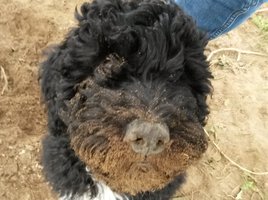 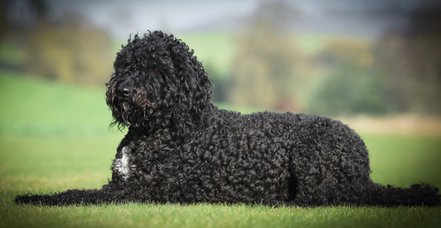 Tuva comes from a litter of 9 puppies.

Since she was little puppy, she has been quite independent, but at the same time very attentive to us. She is quiet and comfortable, and she has learned a lot from Ida, our Lagotto. On walks, she is always near, and comes when we call. She is easily trained and seems to enjoy doing it. She is very easy to bring on visits to other people-she just lies down and take life easy. She is very fond of people, and enjoys being around children of all ages.

She has a certain degree of hunting instinct, small birds and our cats are favorite hunting objects, but when the cat stops and lies down - Tuva stops as well!

In September, we participated at the European Dog Show. She was the only one in Junior class, but in total 7 Barbet-all from other countries. It was fun that for the first time study more dogs of the same breed! The result was EXC and Reserve CAC. In addition, she received the title European Junior Winner 2015!

In June 2016 Tuva was 2 years, and a few days after her birthday, we participated at a local exhibition in the vicinity, in Våler, and here she got the last CERT that was required to be Norwegian champion!  In September 2016 we went to Ljungskile in Sweden together with Jill, Tuvas breeder, and Tuvas sister, Danielle. Tuva got her Cert again, and thus she is also Swedish Champion.

One of Tuvas favorites are tracking. She is incredibly eager, and got surprisingly good in a short time. Now we do relatively long tracks, with different challenges on our way!

She is very eager to go for long walks in the forest, and in the wintertime she also acts as a sled dog.  Another activity we've started is retrieving; it is an activity that falls to taste.

In May 2016, we participated on our first tracking competition ...we vent from the lowest class D to next level C.

The same month we conducted BPH in Sweden. BPH (Behavior and personality test, dog) is a description of the dog's behavior and reactions in a variety of situations and exercises. We had essentially confirmed what we know about Tuva. She is a little reserved when it comes to meet strange people, she is not a tough dog and escape scary experiences, but is quick to let off steam. She has no problems to cope with unfamiliar surroundings and unknown surface. Read more about the result HERE

The summer 2017 Tuva met Tamino wom Staufener Schlossberg. The result was a litter born 18.09.17 with 9 puppies. / female and 2 males. You can read abouth the puppies on my blog